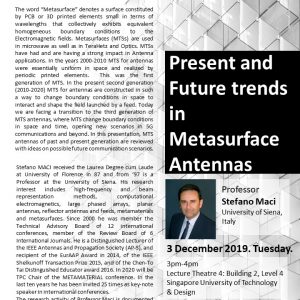 The word “Metasurface” denotes a surface constituted by PCB or 3D printed elements small in terms of wavelengths that collectively exhibits equivalent homogeneous boundary conditions to the Electromagnetic fields. Metasurfaces (MTSs) are used in microwave as well as in TeraHetz and Optics. MTSs have had and are having a strong impact in Antenna applications. In the years 2000-2010 MTS for antennas were essentially uniform in space and realized by periodic printed elements. This was the first generation of MTS. In the present second generation (2010-2020) MTS for antennas are constructed in such a way to change boundary conditions in space to interact and shape the field launched by a feed. Today we are facing a transition to the third generation of MTS antennas, where MTS change boundary conditions in space and time, opening new scenarios in 5G communications and beyond. In this presentation, MTS antennas of past and present generation are reviewed with ideas on possible future communication scenarios.

Stefano MACI received the Laurea Degree cum Laude at University of Florence in 87 and from ‘97 is a Professor at the University of Siena. His research interest includes high-frequency and beam representation methods, computational electromagnetics, large phased arrays, planar antennas, reflector antennas and feeds, metamaterials and metasurfaces. Since 2000 he was member the Technical Advisory Board of 12 international conferences, member of the Review Board of 6 International Journals. He organized 25 special sessions in international conferences, and he held 10 short courses in the IEEE Antennas and Propagation Society (AP-S) Symposia about metamaterials, antennas and computational electromagnetics. In 2004-2007 he was WP leader of the Antenna Center of Excellence (ACE, FP6-EU) and in 2007-2010 he was International Coordinator of a 24-institution consortium of a Marie Curie Action (FP6). He has been Principal Investigator from 2010 of 6 cooperative projects financed by European Space Agency. In 2004 he was the founder of the European School of Antennas (ESoA), a post graduate school that presently comprises 34 courses on Antennas, Propagation, Electromagnetic Theory, and Computational Electromagnetics and 150 teachers coming from 15 countries. Since 2004 is the Director of ESoA.

Professor Maci is IEEE Fellow since 2004, he has been a former member of the AdCom of IEEE Antennas and Propagation Society (AP-S), associate editor of AP-Transaction, Chair of the Award Committee of IEEE AP-S, and member of the Board of Directors of the European Association on Antennas and Propagation (EurAAP). From 2008 to 2015 he has been Director of the PhD program in Information Engineering and Mathematics of University of Siena, and from 2013 to 2015 he was member of the National Italian Committee for Qualification to Professor. He has been former member of the Antennas and Propagation Executive Board of the Institution of Engineering and Technology (IET, UK). He is presently the director of the consortium FORESEEN, presently involving 48 European Institutions, and principal investigator of the Future Emerging Technology project “Nanoarchitectronics” of the 8th EU Framework program. He was co-founder of 2 Spin-off Company. He is a Distinguished Lecturer of the IEEE Antennas and Propagation Society (AP-S), and recipient of the EurAAP Award in 2014, of the IEEE Shelkunoff Transaction Prize 2015, and of the Chen-To Tai Distinguished Educator award 2016. In 2020 will be TPC Chair of the METAMATERIAL conference. In the last ten years he has been invited 25 times as key-note speaker in international conferences.

The research activity of Professor Maci is documented in 150 papers published in international journals, (among which 100 on IEEE journals), 10 book chapters, and about 400 papers in proceedings of international. These papers have received around 6800 citations with h index 41.